My friend and dance partner Larisa introduced me to a Brazilian street vendor from Cachoeira, Bahia up in Harlem near the Apollo Theater on Sunday. He recommended a greatest hits compilation containing songs by one of his favorite Brazilian vocalists, Clara Nunes. I included links to some of my favorite tracks on the album below (click on song title to listen): 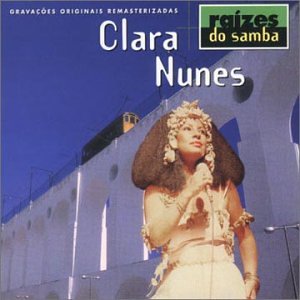 Clara Nunes was a factory worker when she decided to compete in a music contest, placing third at the finals held in São Paulo in 1959. She got a day-job at a radio station in Belo Horizonte (capital of Minas Gerais, Southeast Brazil), and sang in nightclubs.

In 1965, Clara moved to Rio de Janeiro, recording boleros (Spanish music made for dancing) and samba songs on her first album. After a few LPs featuring assorted styles, she signed her name as a samba vocalist in the 70s. In 1974, her album sold approximately 300,000 copies, thanks to the hit samba "Conto de Areia" (Romildo/ Toninho). It was a remarkable number then, helping put down the common idea that women weren't big record sellers and stimulating the companies to invest in other female samba musicians, like Alcione, who made her first album in '75, and Beth Carvalho, hired by RCA in '76.

The following albums transformed her into one of the three samba queens of the '80s, along with the two above-mentioned musicians. In the second half of the decade, she would release one album every year, all of them selling well and featuring historic tracks like "Juízo Final" (Nelson Cavaquinho/ Élcio Soares), "Coração Leviano" (Paulinho da Viola) and "Morena de Angola" (Chico Buarque).

Clara was also famous for songs crafted upon the rhythms of Candomblé, her African-Brazilian religion, and for her typical costumes, as she always dressed in white and wore lots of necklaces and African beads. She died prematurely, after a botched surgery, causing a popular outcry.