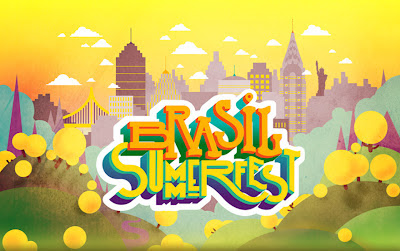 Here's a good opportunity to check out some excellent Brazilian artists live in NYC: Brasil Summerfest. Oh, and it's FREE. You should probably get there early. The artists performing at the opening night of the event are listed below with a brief description of their music and playlists. Enjoy!

Bebel Gilberto With the release of Tanto Tempo in 2000, Gilberto formulated her trademark electronic bossa nova, which took over clubs around the world...more.


Flávio Renegado Renegado’s sound is at once identifiably hip-hop based but incorporates other musical influences such as reggae, maracatu, Cuban music, African rhythms, samba and other typical Brazilian sounds. These global inspirations are exemplified in his newest release, Minha Tribo é o Mundo meaning, “My Tribe is the World.”more.(psst! download album free at his website)