Brazilian music legend Jorge Ben will take the stage at NYC's B.B. King Blues Club and Grill November 17th 2013. Get your tickets now they're sure to go fast. Even if you don't know his name, chances are you're familiar with at least one of his melodies or songs.

Following is an excerpt of a bio from the B.B. King Blues Club and Grill website:


In 1963, Jorge came on stage and sang "Mas Que Nada" (or "no way") to a small crowd that happened to include an executive from the recording company, Philips. One week later, Jorge Ben's first single was released. Jorge Ben Jor (born March 22, 1942 in Rio de Janeiro) is a Brazilian popular musician. His characteristic style fuses samba, funk, and rock into samba-rock, with lyrics that blend humor and satire with often esoteric subject matter. Born Jorge Duilio Lima Menezes, he initially took the stage name Jorge Ben after his mother's name (of Ethiopian origin)... 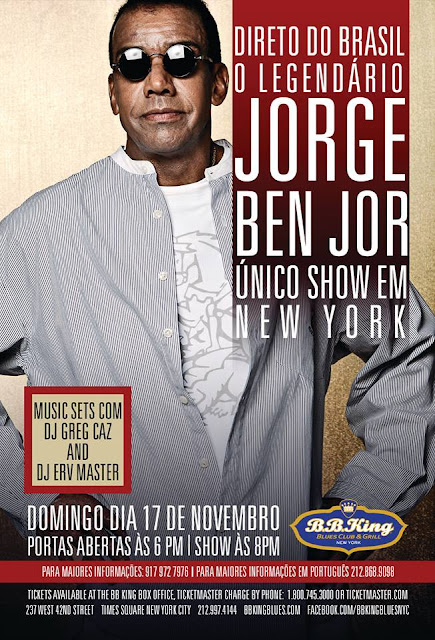